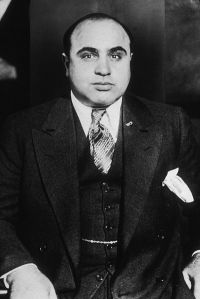 I’ve always known about this, as this is the day my father was born, and when he was younger he thought it was very cool it happened on the same day (like a typical little boy who liked playing cops and robbers!).

Though he was known for his crimes, to some he was viewed as a modern-day Robin Hood who helped the poor. However, he did spend time in Alcatraz, the notorious US prison.

One thought on “On this day: Al Capone dies”