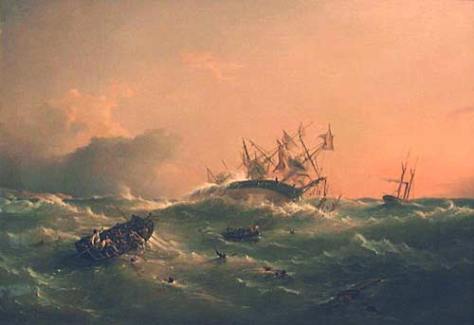 The wreck of the Orpheus by Richard Boydges Beechey

HMS Orpheus, the flagship of the Royal Navy’s Australia squadron sank off the coast of New Zealand on the 7th of February, 1863. 189 people died. 70 survived.

Though an attempt was made to abandon ship, the water surge was too strong, and many were swept away. The wreck occurred near Auckland.

The average age of the crew was only twenty-five, as those who lost their lives included boys between twelve and eighteen years of age.

Thayer Fairburn’s book, The Orpheus Disaster, describes the wrecking in great detail. ‘By 5.30 the guns were beginning to break loose and plunge about as the ship still wallowed and quantities of wreckage were drifting down wind. Ropes hung in festoons from aloft, swinging pendulum-wise with the weight of the blocks still attached, and masses of cordage washed back and forth in inextricable tangles and hung by the side of the ship, streaming down to leeward with every bursting wave.

About six o’clock, Commodore Burnett hailed the crew and addressed them: ‘Every one of you is to say his prayers and look out for himself. I will be the last. The Lord have mercy on us all.’ By about eight o’clock the guns had finally broken loose and the deck began breaking up. Around 8.30 pm the mainmast went by the board, and fell to port, taking the foretopmast and mizentopmast with it. The mainmast, falling, carried with it Commander Burton, Mr Strong the Sailing Master, Midshipman Broughton and Hunt, and about 50 hands.’