Ugh, mostly what I’m thinking about when it comes to Outlander this week are the men who have taken to the internet to rant about it. If you can’t cope with a woman taking the main role in a show, then kindly keep your misogyny to yourselves, thank you very much. It’s the same sort of reaction I’ve seen firsthand when someone has the “audacity” to ask male university students to read a book by a female author. Very disheartening in 2014.

As for the second episode…

I’m really struggling to know what I’d think if I’d not already read the book. It’s impossible to separate one from the other. There have been some justified complaints about the overuse of voiceover, and some people don’t seem to like the flashbacks.

For me, I think the flashbacks have been done well. So much of the book involves Jamie sitting around reciting lengthy stories of his past to Claire. He does a lot of telling. The flashbacks are pretty necessary because so much of the present conflict comes from things that happened before the book starts.

As for the voiceover, it really needs to go. It’s totally unnecessary. The book is written in the first person, but I didn’t like Claire much then, so I don’t want her over-explaining everything to me now! 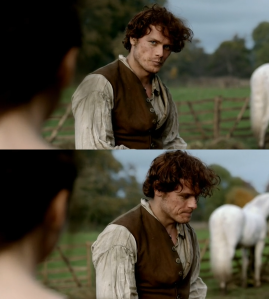 I like Jamie more each time he’s on the screen. They’ve outdone themselves with the casting there.

The Outlander book has a lot of violence in it, but it’s becoming even more apparent in the show. Once dozens of pages of erroneous descriptions are removed, what you’re left with is scene after scene of Jamie getting gravely hurt (and it’s going to get much worse later on). In just two episodes he has dislocated his shoulder, been shot, fallen unconscious, and now he’s volunteered to be beaten up to save the honour of a girl, leaving him bloody and bruised, with an eye swollen shut.

As much as I liked Claire in the first episode, Caitriona Balfe’s weakness and inexperience as an actress showed through in the second. This was made very clear when Lotte Verbeek, playing Geillis Duncan, made her first appearance. Verbeek is by far the superior actress, and has charisma on the screen in a way I don’t think Balfe will ever manage.

I must say, though, that eighteenth century dress definitely looks better on runway model-height Claire than delicate little 1940s fashions did!

I do love how much attention to detail there is. Sets and costumes are wonderful; the “look” of the show is enough to keep you watching.

I am enjoying the show, and I hope that people who haven’t read the book will stick with it, despite its faults. I’m also hoping the faults will straighten themselves out in the future.