Today – despite some people’s best efforts to tear it down – The Rocks district in the centre of Sydney is one of Australia’s most historic. The date of this photograph is estimated as Edwardian, but it is only a guess taken from the fashions etc. 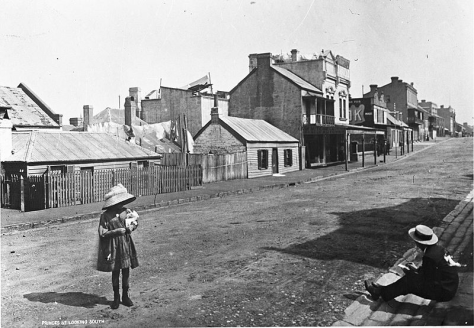 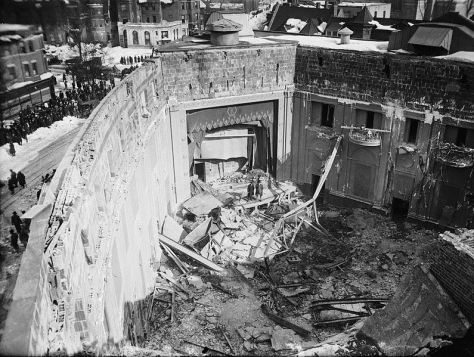 The Knickerbocker Storm, a blizzard that hit Washington D.C. in the United States for two days in 1922, led to the collapse of the Knickerbocker Theatre just after 9pm on the 28th of January.

Ninety-eight people were killed, and a further one hundred and thirty-three injured in the collapse. 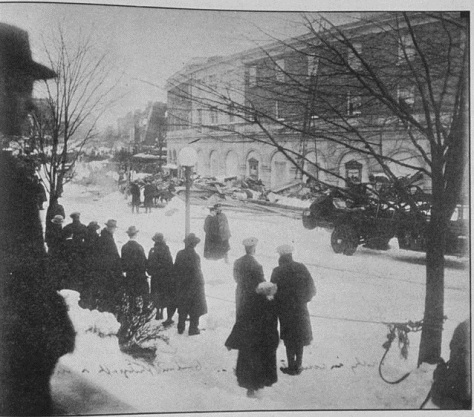 The tragedy was caused by snow gathering on the flat roof until it gave way under the strain. People who were there said they were given no warning (no sounds of the building straining under the weight, for example). 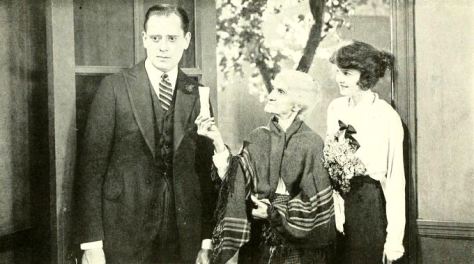 The silent film Get-Rich-Quick Wallingford (1921) was playing at the time it happened.

Both the theatre’s architect and its owner committed suicide in the years afterwards. 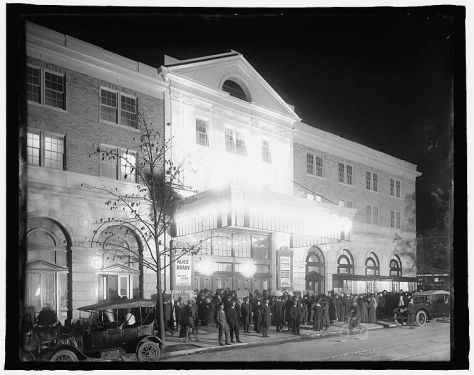 The storm hit other areas of the United States, including heavy snowfall in Maryland and Virginia. Temperatures stayed many degrees below freezing for much of the event. 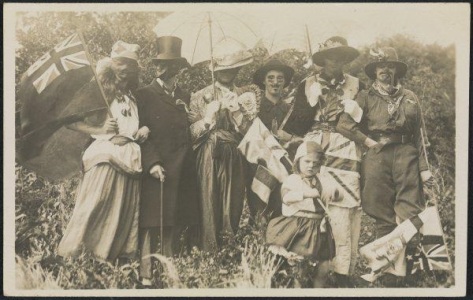 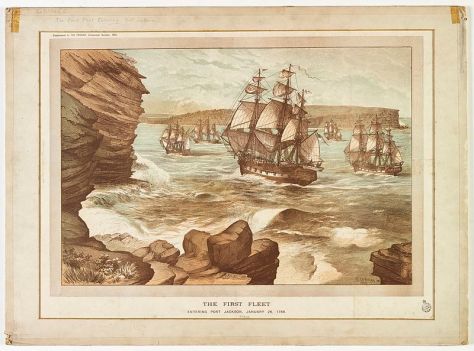 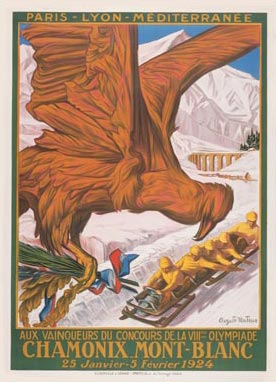 The first Winter Olympics opened in Chamonix, France on the 25th of January, 1924.

Though both Figure Skating and Ice Hockey had featured in Summer Games in the past, there’d never been an official event for winter sport before. 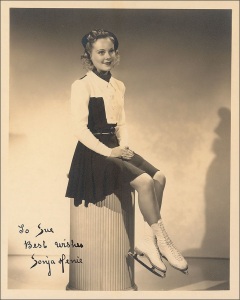 This was the first Olympics Sonja Henie, who I (accidentally – no matter what people have thought in the past!) share my name with skated. She was eleven at the time, and got nowhere in the 1924 competition, but she would go on to win gold at the next three Games and then have a successful movie career. 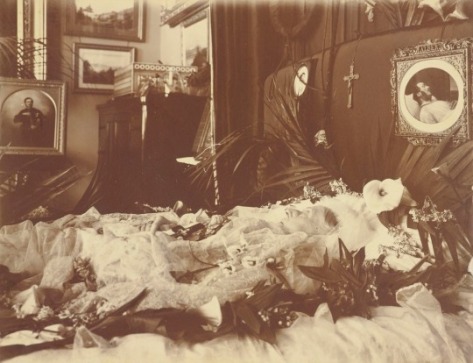 On the 22nd of January, 1901, Queen Victoria of the United Kingdom of Great Britain and Ireland died at the age of eighty-one. 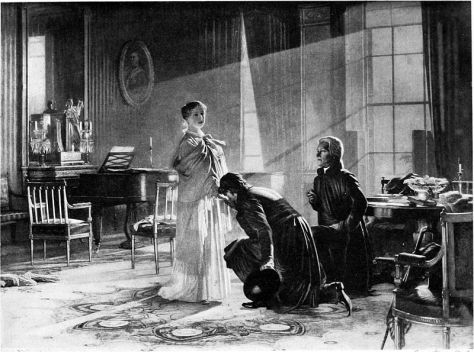 Queen Victoria receiving the news of her accession to the throne, 20 June 1837.

She was buried in a white dress and her wedding veil, as she had left instructions for her funeral to be white. Her death marked the end of the Victorian era and the beginning of the Edwardian Era. 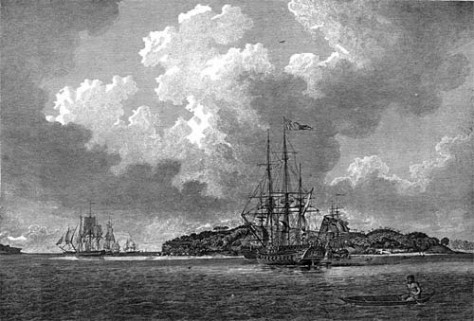 On the 20th of January, 1788, the main body of the First Fleet arrived in Botany Bay, modern-day Australia.

The First Fleet, consisting of eleven ships of convicts, marines and seamen, had left England in 1787.

Botany Bay was deemed unsuitable for a colony, with concerns about the lack of fresh water and the swampy land, and the fleet moved further north, to Port Jackson. The fleet’s arrival in the second port is marked by Australia Day on the 26th of January. 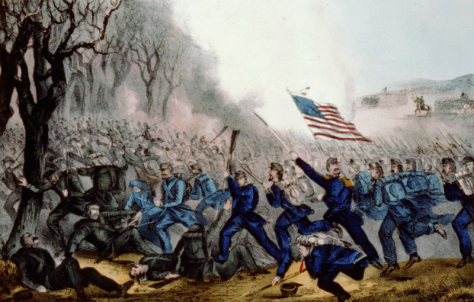 Part of the American Civil War, the Battle of Mill Springs was fought in Kentucky on the 19th of January, 1862.

Though soon eclipsed by more famous battles in the press, the Union victory was widely celebrated at the time.

The Battle of Cape St Vincent was fought at night – unusual for the time – on the 16th of January, 1780. Part of the American War of Independence, the battle was fought off the coast of Portugal, between Britain and Spain.

Britain defeated Spain, as seen in this painting by Francis Holman, created the same year. 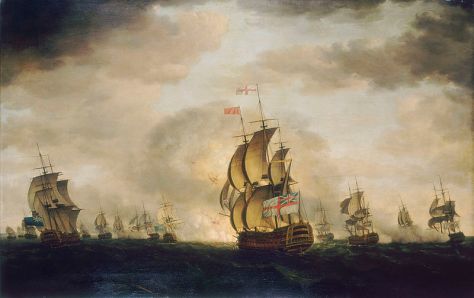 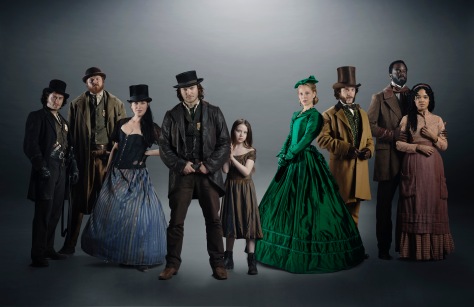 I know I’m very late to the party with this show! Recently I was scrolling through Tumblr and came across some clips of a woman dressing in fancy mid-Victorian clothes. What’s that? I thought. I might want to watch that!

I had a bit of a thing for Gangs of New York way back when it was released, and so when I looked up Copper and discovered it was set in the same location (Five Points, Manhattan) at about the same time, I knew I had to watch it.

But it’s not always that easy. iTunes refuses to make it available to Australians. It’s not on Foxtel. I had to order myself a DVD set. But it was worth it. 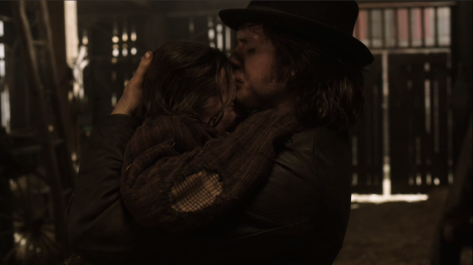 The first episode of Copper opens with our hero, Kevin Corcoran, hiding out, waiting to move in on some thieves. There he meets Annie, a child prostitute. The opening of the show will definitely get you hooked. A bit violent, a bit gritty and a lot corrupt.

I think they’ve done a pretty great job with the characters. Yes, there’s a child prostitute, but she’s not exactly what you’d expect. Yes, there’re police officers, but you never quite know what side of the law they’re going to be on. Yes, we visit the rich crowd on Fifth Avenue, but they’re pretty well-rounded characters.

The show targets all kinds of people. The three-dimensional African American characters are a welcome inclusion. My only issue is they went a little overboard trying to make Matthew Freeman good at stuff. I mean, he’s really good at ALL stuff. A doctor, a coroner, an 1860s version of the entire CSI cast all rolled into one. There’s no crime he can’t solve and no aspect of science he isn’t an expert in! 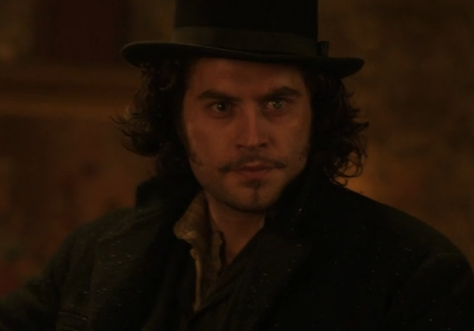 My favourite characters are the lead, played by English actor Tom Weston-Jones (who I didn’t even recognise at first, he’s so different here), and his friend, Francis Maguire, played by Irish actor Kevin Ryan. There’s just something about the way they hold my attention when they’re on the screen.

Some of the plot twists have me thinking about them days later. There aren’t many shows where you’ll see a rich woman subtly asking a cop to kill her husband, or see that same cop ordering a child to commit murder. It’s a really interesting show, and I feel sad it never got the attention it deserved. Even with its faults, when you consider the generic stuff that people watch religiously (and hand out so many awards to), Copper stands above the others.