Wolfgang Amadeus Mozart’s famous opera, The Magic Flute, premiered in Vienna on the 30th of September, 1791.

The playbill for the premiere.

Emanuel Schikaneder, who wrote the German libretto, hosted the premiere at his theatre, the Freihaus-Theater auf der Wieden. Mozart conducted the orchestra, while Schikaneder performed in the show alongside Mozart’s sister-in-law. 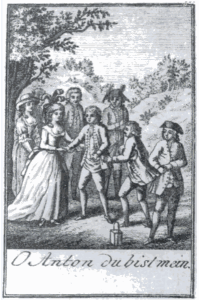 The opera was immediately considered a success, though no reviews of the first performance exist.

Tower Bridge, London’s most recognisable bridge (and frequently – incorrectly – identified as London Bridge by tourists), photographed here under construction on the 28th of September, 1892.

On the 27th of September, 1903 the Old 97, a Southern Railway train, derailed at Stillhouse Trestle near Danville, Virginia.

The crash inspired a ballad that would become famous in the United States, and would later become the focus of a copyright case.

The crash occurred because the train’s operator was running at high speed in order to stay on schedule. The train derailed and fell into a ravine. Some of the survivors attributed their luck to jumping from the vehicle before its plunge down the slope.

This photograph is believed to have been taken a few days after the disaster, as the train has been set back upright.

The Ottoman Turks began their Siege of Vienna on the 27th of September 1529. Suleiman the Magnificent led the Ottoman Empire’s first attempt to take Vienna.

The siege ran until the 15th of October, when the Christian Coalition defeated the Ottomans. 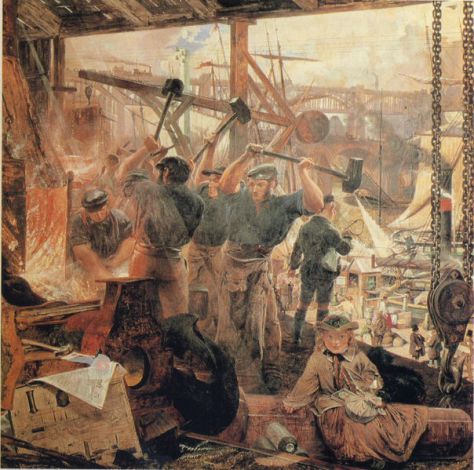 Today, the 21st of September, is the 78th anniversary of the publication of J. R. R. Tolkien’s The Hobbit.

The iconic British comedy, Fawlty Towers, had its premiere on the 19th of September 1975. 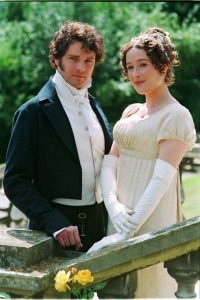 If the majority of people are to be believed, the 1995 BBC adaptation of Pride and Prejudice is The One. The definitive, one, the perfect one. It is the reason Colin Firth has a career, and the reason there are so many Jane Austen fans to this day.

I’ve seen it ninety gazillion times. I’ve been to some of the filming locations. I enjoy it.

And yet I don’t love it the way most other people do.

I have the “Making Of” book and have a great deal of respect for what they did with this production. (It’s still very much in print. Read it! If you’re a writer or reader of the Regency, read this great book!)  It’s imperfect, but when you’re researching your show to the point you’re having period-appropriate fabrics made specifically for secondary characters’ gowns, then you know you’ve done a good job. 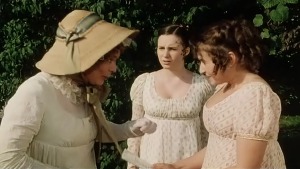 Even if there’s a whole lot of cleavage on display in the middle of the day!

Also, credit must be given for the locations. Unlike the anachronistic 2005 version, they don’t have the Bennet family living in a filthy, falling down hovel, and they haven’t gone crazy and moved Darcy into Chatsworth House.

I have to appreciate how much of the book they managed to get onto the screen. Still, some of my favourite scenes have been omitted, but this is by far the best adaptation if you want to see the whole story unfold. So, credit given there.

Not my Elizabeth Bennet!

However, Jennifer Ehle’s interpretation of Elizabeth Bennet used to be my favourite, but now I don’t really like it at all (the 1980 version is by far my favourite now). Ehle doesn’t resemble the character from the book at all, (something highlighted more each time I read the book and remind myself what she’s supposed to be like), except for her sparkling eyes.

She also plays the character much, much older than Lizzie’s twenty years, making the scenes of her literally frolicking about the countryside look mildly ridiculous. Mind you, the blue suits her much better than the curry colour (the costume designer’s word, not mine) she wears for half the production. They decided her character was “earthy”, but that doesn’t mean she needs to actually look like the earth!

And then there’s the fact she spends so much time smirking and rolling her eyes you have to wonder how Darcy was ever deluded into thinking she even liked him, let alone wanted to marry him! 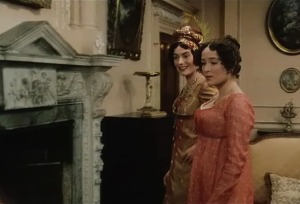 Some of Miss Elizabeth’s death glares for Mr Darcy. No wonder he thought she loved him! 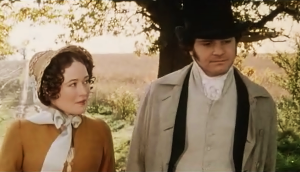 I believe in Darcy’s side of the main relationship, if not so much Elizabeth’s. Unfortunately they the all-important final proposal scene is one of the weakest scenes in the entire production.

The best scenes Ehle gives us are those with her sister, Jane. There is genuine affection and camaraderie there, and it’s the only time I find her character likeable in this version.

Colin Firth is a good actor, and I find it interesting to read about how he approached the character. He did a great job with it. I sort of resent the fact this is known as “the Colin Firth version” because they’ve added so much extra Mr Darcy to the story he has become the star of the show.

My problem is that I don’t find him attractive (by the way, he’s a natural blond, and I prefer him that way). I moved to London not long after this version came out, and the number of times I was forced to endure other women re-watching the ridiculous and anachronistic Darcy diving in the scummy pond scene…

The producers doing their best to turn Darcy into Fabio.

The Jane in this version cops a lot of flak for not being pretty enough, but I do like the way Susannah Harker plays her. She captures her sweetness even if the Regency era styles don’t make her look as nice as she does in other shows.

I actually think the majority of the casting is a bit off. By far the worst offender is that screeching harpy Mrs Bennet. I’ve seen her portrayal compared to a Monty Python actor in drag, and that’s pretty accurate. She also reminds me of the mother role in the ballet La fille mal gardée – an over the top character role played by a man:

While on the other hand Mr Bennet in this version is made so likeable it’s easy to forget he’s an irresponsible father who buries his head in the sand – when he’s not being outright cruel to his younger daughters.

Bingley is a bit of an overly optimistic doofus, but at least he’s not a total blathering fool like the Bingley in the 2005 version. The actress playing Lydia is not only a decade older than her character, but also older than the lead actress. Kitty – a pretty woman in real life – has the world’s ugliest hairstyles. Mary has been turned into a nerdy cliché, and they deliberately gave her bad skin and greasy hair. Because, you know, you can only be smart if you’re ugly! 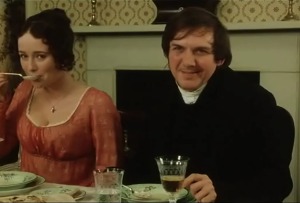 Mr Collins – who should be tall and young – is small and slimy and acts like he might be a paedophile. They also deliberately made him greasy!

Charlotte Lucas is one of the prettiest members of the cast (no matter how hard they tried to make her ugly with severely-styled hair), and she’s supposed to be plain! 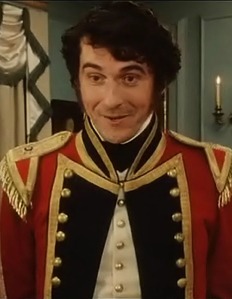 Then you have Wickham, whose weird facial hair might be period-appropriate, but who must have got all the girls of England drunk in order to convince them he was a heartthrob!

I have plenty of dislikes about this adaptation, and yet it is highly watchable and introduced Jane Austen to a much wider audience. It deserves credit for a lot of things, but since I first watched it during its original broadcast, and then in nonstop repeats when we got it on VHS, I’ve sort of gone off it a bit. I suppose I’m more familiar with the book and the era than I was then, and now I like it rather than love it.

The British women’s gymnastics team at the 1948 London Olympics. This is a few decades before the Soviet and Romanian gymnasts popularised young girls competing at Olympic level (a change that is being reversed again now, helped along by raised age requirements).

Italian ballerina Pierina Legnani photographed in London on the 15th of September, 1891, fifteen days before her twenty-eighth birthday.

Legnani was born and trained in Milan, went on to become the Prima Ballerina of La Scala, and had a hugely successful career around Europe. Considered one of the world’s greatest ballerinas, she was the dancer who successfully performed thirty-two fouette pirouettes en pointe. This trick is still considered extremely difficult today and is included for the main dancer in a number of ballets.

Here is Ukrainian ballerina Oksana Bondareva performing the thirty-two fouettes (at 7:50 into the video). Because she’s so good, she’s doing a lot of them as double rather than single pirouettes!

Pierina Legnani returned to Italy and continued to work for La Scala in their school until only months before her death on the 15th of November, 1930.