The details of the photograph note:

In the photograph are George B. Cortelyou, Roosevelt’s future secretary of Commerce and Labor, on Roosevelt’s right, and William Craig, the first Secret Service agent ever killed in the line of duty, on the far right in the photograph.

This time next week I should (hopefully!) be on a plane from Canberra to Qatar.

I’ll be in Ireland (Dublin for a little while, and then up to Northern Ireland) for a few weeks, and then I fly to England, where I’ll be in Yorkshire and then Derbyshire for a few more weeks.

I come back to Australia long enough for a trip to the Chinese embassy, and then I’ll be in China into November.

Now, I’d better take a look at my suitcase and pack!

Today is Ukrainian Independence Day (such as independence is for Ukraine at the moment). Here is a 1960s photograph of a man performing the Hopak, Ukraine’s national dance. 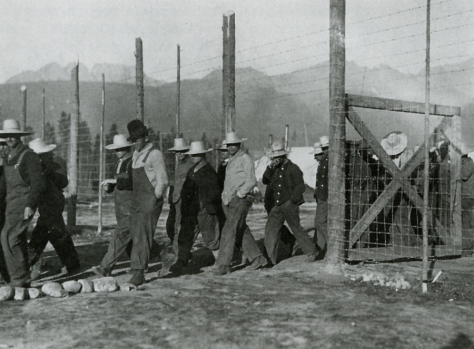 The 22nd of August, 1914 saw the passing of Canada’s War Measures Act. The act would result in government-sanctioned human rights abuses against Canadians of largely Ukrainian origin.

Ukrainians were declared “enemy aliens” and thousands were put into concentration camps to be used for slave labour across Canada. They were seen as enemies because the western regions of their homeland were under Austro-Hungarian rule at the outbreak of the First World War.

Some 80 000 Ukrainians who weren’t imprisoned were still required to register as enemy aliens and barred from leaving the country.

Plaque and statue at Castle Mountain near Banff.

The infamous Castle Mountain Internment Camp in Alberta saw prisoners used to work in the national parks, where they established the groundwork for the massive tourism to Banff and Lake Louise seen today.

Abuses at the camp were widespread, and were reported as far away as Britain.

Internment continued for two years after the war ended.

Ukrainian cemetery at the Kapuskasing Internment Camp in Ontario.

The internment of ethnic groups was widespread across many countries in both the First and Second World Wars, including in Australia and the United States, though the internment of Japanese Americans in the 1940s is generally the only instance most know of.

Today is Vietnam Veterans Day in Australia. Over sixty-thousand Australians served in Vietnam between 1962 and 1972. Here is the Federation Guard marching in Canberra during the Battle of Binh Ba anniversary service in 2009 (you can find it on other sites these days, but it’s actually my mother’s photo).

Binh Ba was one of Australia’s major victories in the war, and it was one of the last operations my father was part of before returning home.

The National Library of Australia, located in Canberra, was opened by Prime Minister John Gorton on the 15th of August, 1968.

Sir Robert Menzies speaks at the laying of the foundation stone on the 31st of March, 1966.

Film star Chips Rafferty is seen here on the 14th of August, 1943, while he was a member of the Royal Australian Air Force.

Rafferty, born in New South Wales to an English father and Australian mother, rose to prominence in the 1940 war movie Forty Thousand Horsemen. Australia entered World War Two on the 3rd of September, 1939, and Rafferty joined the Air Force on the 29th of May, 1941 – the day after he married Ellen Jameson.

He was discharged  from service on the 13th of February, 1945. In the years after the war he was contracted to England’s Ealing Studios, where he found international fame.

Instructions in the use of the Owen gun. Belmont, Queensland. X

The Australian Women’s Army Service, created to release more men into forward positions in the military during the Second World War, was formed on the 13th of August, 1941.

Sergeant Pritchard (right), the only Japanese translator in the Australian Army. X

The AWAS was preceded by the Women’s Australian National Service in 1940, where women proved they were capable of performing traditionally male roles. 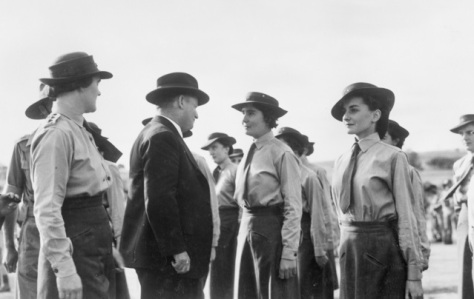 The Minister for the Australian Army, the Honourable F.M. Forde, with AWAS members in Western Australia in 1943.

24 026 women were enlisted over the course of the war, and several hundred served in New Guinea.

These aerial photographs show the Japanese city of Nagasaki before and after the American nuclear bomb attack on the 9th of August, 1945.

Amongst those in the city at the time of the bombing were thousands of conscripted Korean workers and hundreds of Western (Allied) prisoners of war. Not all of them survived. 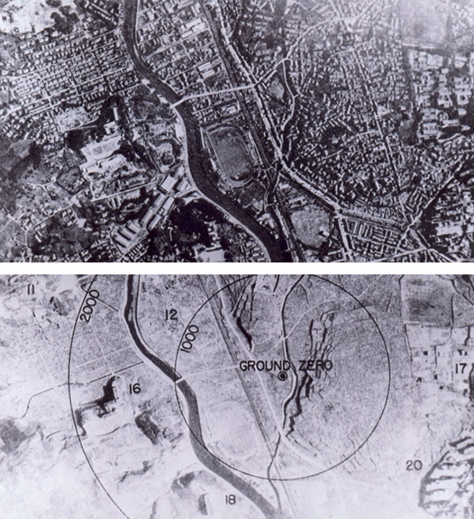 The iconic Battle of Amiens, later to be known as the opening chapter of the Hundred Days Offensive that ended the First World War, took place from the 8th to the 12th of August, 1918.

This painting, by Australian official war artist Will Longstaff, is titled 8th August, 1918. It shows a column of German prisoners of war heading in one direction, while horse-drawn artillery heads in the other.

The painting can be found in the collection of the Australian War Memorial in Canberra.