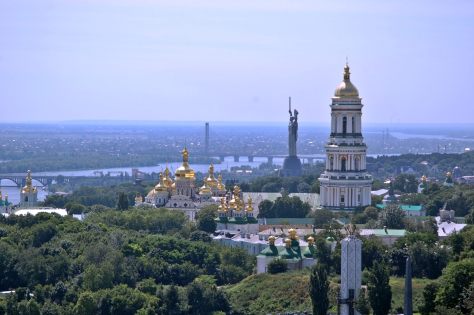 The Lavra in Kyiv

In a centuries’ overdue move, and one that is going to lead to more Russian aggression in Ukraine, the Constantinople Patriarchate approved Ukraine’s split from the Russian Orthodox Church overnight. It is being called the biggest split in all of Christianity in a thousand years.

Russian Orthodoxy was forced on Ukrainians over several centuries, finishing with the forced conversion of my family’s Ukrainian Catholic villages in the west of the country when Churchill gifted the country to Stalin after the Second World War (thanks for that, Winston!).

What will happen now? Well, in anticipation of this move, the Russian military has already stepped up attacks in Ukraine’s east, with people being killed in record numbers again. It has to be understood that Russia’s Church – in the past decade or so – has become a weaponised political party that effectively runs the country, behind only Vladimir Putin.

Additionally, experts are predicting staged attacks on Russian churches, so that Putin can blame them on “fascist Ukrainians”, and attack and invade even more.

What I’m worried about is attacks on the thousand-year-old Orthodox monasteries and cathedrals in Ukraine, such as the Lavra complex in Kyiv. I sure hope they’ve stepped up security at those locations.

This move removes a major aspect of Russian colonialism from Ukraine.

I’m not sure why Russia never comes up alongside the likes of France and Britain and Spain in discussions about colonialism and cultural appropriation (because people think Russia is romantic?). The Russians were just as brutal as anybody else (see the Holodomor). And – unlike other nations – their behaviour is ongoing (see the annexation of Crimea, the invasion and occupation of eastern Ukraine, the ongoing invasion and occupation of one-fifth of Georgia, and the illegal occupation of Moldova).

The next few weeks are going to be chaotic for Eastern Europe.