This is the 21st September edition of New York’s Sunday News from 1958, announcing that US civil rights activist Dr. Martin Luther King, Jr. had been stabbed in the chest the day before, at Blumstein’s Department Store in Harlem.

The attacker was a woman named Izola Curry, and the crime surprised many as she was African American.

Surgery was required to removed the knife, and King stayed in hospital for almost two weeks.

On the 20th of September, 1958 a woman by the name of Izola Curry approached US civil rights activist Dr. Martin Luther King, Jr. in Blumstein’s Department Store in Harlem, New York. After confirming the man she was speaking to was King, she stabbed him in the chest with an ivory handled letter opener. It was also discovered Curry had a gun hidden in her bra.

The crime was considered especially unusual as Curry was African American. 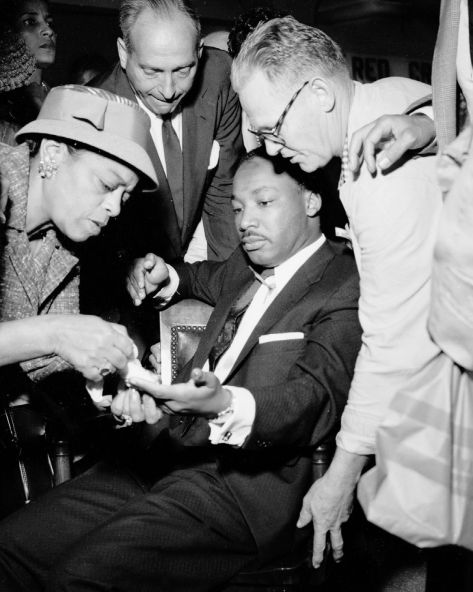 Being treated with the blade still in his chest.

The blade was so close to King’s aorta that it was feared he’d die if he moved suddenly. The weapon was removed via surgery.

With his wife Coretta in hospital on the 30th of September.

Curry was committed to a mental institution, and continued to live in various facilities until her death at the age of ninety-eight in 2015.

More information can be found HERE and HERE.