This painting, titled The Homecoming from Gallipoli, 15 July 1915, is by New Zealand artist Walter Armiger Bowring (1874 – 1931). It depicts soldiers returning home from the Gallipoli campaign in the First World War.

2779 New Zealanders – one-sixth of those who fought – died in the campaign.

New Zealand Mistletoe circa 1920, by Nina Jones (born in Christchurch in 1871, died in Nelson in 1926). Jones was a prominent New Zealand botanical artist. 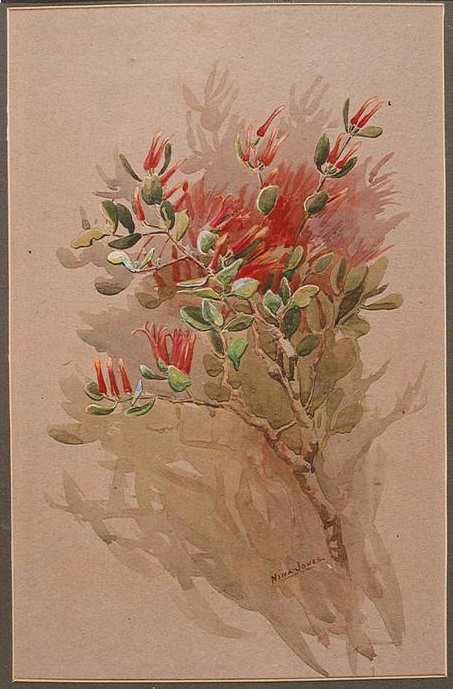 Christmas Day in the London Bridge Canteen depicts HRH Princess Helena Victoria, creator and Chairman of the Ladies’ Auxiliary Committee of the YMCA paying a visit to workers during the First World War.

The princess, a granddaughter of Queen Victoria, was one of a number of royals to drop German names from her title at the outbreak of the war. She never married, but went on to live through both World Wars.

The image was created by war artist Clare Atwood in 1920. Atwood, an unusual woman for her time, was a known lesbian who lived in a ménage à trois relationship with two other women until their deaths. 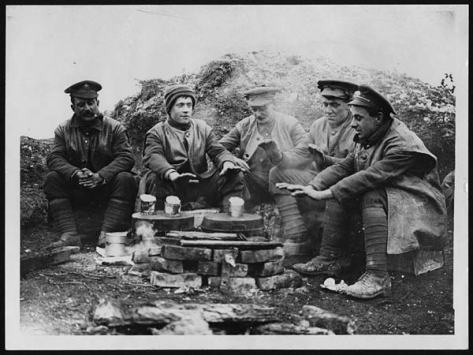 As today is Remembrance Day, here’s an image of British Army Sherwood Foresters keeping warm while waiting for lunch during the Battle of the Somme (First World War). The battle claimed over a million casualties over the 140 days it was fought.

Wounded soldiers of the British Army await transport to hospital near Albert, Somme on the 12th of September, 1916 in this photograph by Ernest Brooks.

The infamous Battle of the Somme, part of the First World War, began on the 1st of July and continued until the 18th of November.

The 24th of August is Ukrainian Independence (such as it is now) Day.

Here is the tryzub – the trident of Ukraine – printed over a Russian stamp during Ukraine’s struggle for independence during the fall of the Russian Empire and the formation of the Soviet Union. Circa 1918.

Ukrainians are photographed harvesting in Separator, Saskatchewan, Canada in 1915.

At this point in time Ukrainians were forced to register as “enemy aliens”, and many were put into concentration camps to perform forced labour during World War One.

P. L. Travers in the role of Titania in A Midsummer Night’s Dream, circa 1924.

Today would have been the 121st birthday of the Australian creator of Mary Poppins, P. L. Travers.

Born Helen Lyndon Goff in Maryborough, Queensland on the 9th of August 1899, she moved to Bowral, New South Wales in 1907.

As an adult she travelled Australia and New Zealand, and later England as an actress, changing her name to Pamela Lyndon Travers.

Travers created Mary Poppins while renting a cottage in Sussex, England in 1933, and the first book was published in 1934.

The eighth and final book in the series was published in 1988.

British soldiers pose for a photograph after the Battle of Albert, part of the opening phase of the infamous First World War Battle of the Somme, in July of 1916. The men wear helmets they captured from the Germans, and sit with a dog they found in a dugout.

1910 in New York saw the first public radio broadcast – live performances of the operas Cavalleria rusticana and Pagliacci from the Metropolitan Opera House, and the second ever NAACP meeting.

The photograph was taken by Lewis Wickes Hine.