The “L” – short for Chicago’s elevated train system – is seen here under construction on the 22nd of September, 1968.

The first image is of work underway on Sox–35th station.

The second image is of work on 69th Street.

A nationwide railway strike in the United States, which came to be known as the Pullman Strike, occurred on the 11th of May, 1894.

Considered a revolutionary moment for labour laws in America, nearly 4000 workers for the Pullman Company refused to work after a reduction in their wages.

The image below shows workers protesting outside the Arcade Building in Pullman, Chicago. 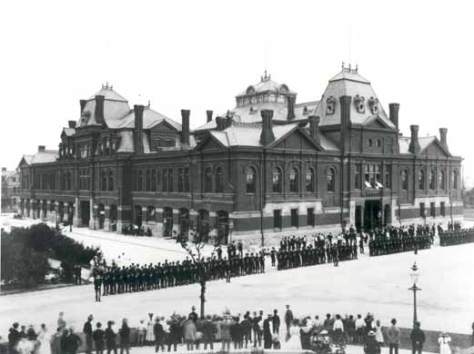 On the 19th of November, 1996, two planes collided on the runway at Quincy, Illinois in the United States. Everyone on both planes died in the resulting fire and explosion.

The incident occurred when United Express Flight 5925 came in to land at the same time a King Air plane took off on an intersecting runway.

Inadequate rescue and firefighting equipment meant that while some people on the ground came to the aid of the passengers and crew, they could not get anybody out in time.

The Palm Sunday tornado outbreak occurred across the US states of Indiana, Ohio, Michigan, Wisconsin, Illinois and Iowa on the 11th and 12th of April, 1965.

Forty-seven tornadoes struck, including the “double tornado” in Indiana (above) that killed fourteen people. 271 deaths were confirmed across all states.