Something that bugged me about this miniseries – though I know it wasn’t really anybody’s fault:

It was filmed in cold weather and it’s supposed to be summer! Everyone is prancing about outside in their pretty, floaty, short-sleeved dresses and it’s so cold you can see their breath!

So much to resolve and only one episode to do it!

Amanda’s appearance in the middle of Jane Austen’s Pride and Prejudice world certainly caused a mess. Jane is married to Mr Collins, Mr Bingley is the one acting like Mr Wickham is supposed to and Mr Darcy is in love with Amanda instead of Elizabeth (who he hasn’t even met).

Even though I knew it was the final episode, I did double and triple-check, because I expected happy endings for everyone and didn’t see how it could be done in one episode. It didn’t help that there was more drama heaped on top of everything else that had gone wrong so far!

My two favourite parts of this episode were: 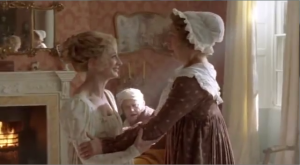 #2 The moment everyone blasts back into the present day. As Mr Darcy says, ‘What is this dreadful place?’ 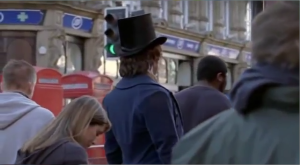 What did I think of the ending? Well, it was as convenient as you would expect, and I honestly don’t think Amanda would just settle in happily in the life she has chosen.

However, this is a show about a time-travelling portal in a bathroom and a book world coming to life, and so yes, it shouldn’t be taken too seriously! There’re some massive anachronisms and some very hard-to-believe situations, but then isn’t that exactly what you’d expect from this show?

I’m glad I got over my fear of Amanda’s too-modern hairstyle and watched Lost in Austen. I’m not one to have a fit when little tweaks are made with Jane Austen’s work, and I’m always happy to see different takes on famous and very familiar characters.

Anybody with an interest in period drama wold enjoy this – but just make sure you know the plot of Pride and Prejudice first!

The episode before the finale – the one where it’s compulsory for everything to get worse so it can be fixed in the next one!

Amanda is in a lot of trouble. Mrs Bennet has kicked her out of the house, and when she goes to visit Mrs Collins, it’s not Charlotte he’s married to, but a very miserable Jane.

I have to say, there were some things here that really made no sense whatsoever (even considering the silliness of the premise). Mr Collins is seen as a sleazy, perverted man and so the nature of his marriage to Jane isn’t believable.

In the meantime, Mr Bingley is having a breakdown. He’s realised that being the happy bumbling dope was never going to get him what he wanted, but it’s a little late now!

Bingley and Jane are made out to be totally naïve to the world in this version of the story, but then I think that’s more or less how they are in the book. When you expect everyone to be good and refuse to see what’s right in front of you if it might make you unhappy, you’re bound to end up hurt. I do like that they have a wakeup call and are both changing as the series goes on.

I like that about a lot of the original P&P characters as they’re portrayed in this series, actually. Mr Bennet is well-rounded; I think he tends to be too… I suppose too nice in most incarnations. Also Mrs Bennet’s plight is shown in a way that makes her more sympathetic, as we can see where her desperation stems from. She has to push her daughters on men because her husband is more or less absent from the marriage.

Meanwhile, Darcy has had to admit his love for… Amanda (whoops!). He hasn’t met Elizabeth Bennet yet, so this could get interesting.

He indulges her with recreating one of her favourite Pride and Prejudice moments.

Yes, it’s an incredibly silly scene, but I do love how the scriptwriters managed to sneak 1995’s gratuitous scene into the actual Austen book!

I finished this episode and checked to see there really was only one more. There’re so many big storylines that need resolving and not much time to do it!

After the miniseries’ first episode ended with modern-day Amanda racing off in the rain after Jane Bennet, the second picks up with Jane doing exactly what she was supposed to do in Pride and Prejudice: become trapped in My Bingley’s house, too ill to go home.

Amanda takes Elizabeth’s place, looking after a sickly Jane (with the help of some paracetamol she brought with her from the future) in between ignoring Caroline Bingley’s snobbery. Here’s where the anachronisms became a bit hard for me to ignore: Mr Bingley hangs out in Jane’s bedroom. 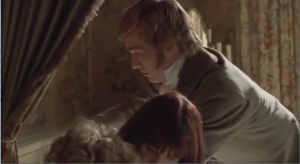 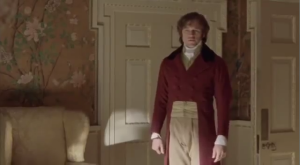 This would have been a big, big no-no in Regency society. Sure, the extremely anachronistic 2005 Pride and Prejudice movie did it, but that should hardly be used as a handbook for how to “do” Austen!

However, Bingley still has his sights set on Amanda, a problem she solves in a way I didn’t expect. There’re a few fairly embarrassing scenes here, when Amanda doesn’t know how to perform the way a Regency woman is expected to…

Of course, things can’t just go smoothly, and the book dictates the next thing that happens is Mr Wickham swoops in. In this version, he saves the day. 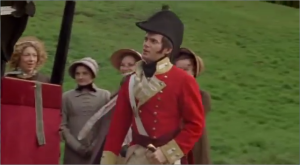 This is closely followed by Mr Collins’ arrival; he is certainly the most disgusting incarnation of the character yet.

Yet again, nothing goes to plan:

This was another fun episode. Not quite as fun as the first, but that’s because Collins is disgusting and most of the characters are acting like total idiots.

When episode two ends you’re going to be left wondering how anything can ever be resolved – which is why I watched the next one as soon as I had a spare few minutes! 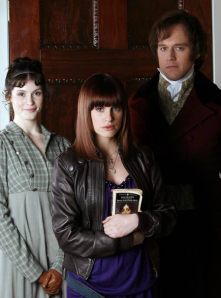 Even though I’ve known about this miniseries for ages, I haven’t watched it until now. The tipping point was when I saw some stills and the actors cast to play Darcy and Bingley just looked so… right for their roles that I thought maybe it wasn’t going to be as silly as I thought.

On the negative side, and one of the main reasons I put it off for so long was (don’t laugh) the main character’s hair! I know the point of Amanda’s look is that she doesn’t quite fit in in the early 1800s, but there’s no way she could have waltzed around looking like that in the Regency era and not raised any suspicion. Just no way.

Anyway, I got brave and put my fear of a hairstyle aside and watched.

And I enjoyed it a million times more than I thought I would.

Lost in Austen requires you to put any sort of believability aside and go along for the ride. Pride and Prejudice obsessed modern woman Amanda Price finds Elizabeth Bennet in her bathroom one night; there’s a portal connecting her reality with Jane Austen’s world.

Amanda finds herself stepping over the bathtub and into the top floor of the Bennet house. Then the door closes, with her on the Bennet side and Lizzie in 2008, and there they stay.

This is the most enchanting part of the entire production. 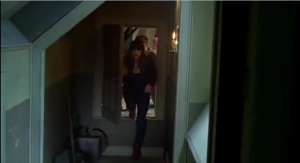 Never has there been a moment for Jane Austen fans like this one: it looks like a fairy tale, but if you were given the chance, would you really want to live in it?

The casting is spectacularly good, as far as I’m concerned. The Bennet girls seem more like the ages they’re supposed to be than in any other adaptation (expect maybe the 2005 movie version). The father (who Downton Abbey fans will recognise – but I still know him as the guy who conducted the wedding for the Vicar of Dibley!) makes a great Mr Bennet, and Alex Kingston might be the best thing in the whole production as Mrs Bennet. She gave that woman some depth! Elizabeth has one of the smallest roles in the show, which I’m surprised to be disappointed about. I haven’t liked Gemma Arterton in other things, but she was so good as Lizzie I didn’t even recognise her.

This first instalment takes us up to the Meryton Assembly Hall, where Amanda manages to make a mess of the story Austen wrote, attracting Bingley instead of Jane doing the honours.

In all, this is excellent fun. I don’t find it at all disrespectful to Austen’s work. Sure, there are some glaring anachronisms, but it wasn’t too bad yet (I might have a couple of grumbles later on)!