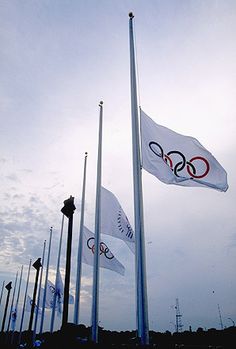 Olympic Park in Atlanta, Georgia, USA was bombed on the 27th of July, 1996. Two people were killed and 111 injured when Eric Robert Rudolph placed a US military pack containing three pipe bombs surrounded by nails in the so-called “town square” of the Olympic venue.

He later said he committed the attack because he didn’t agree with women having the right to abortion.

Rudolph later confessed to the bombings of women’s health clinics and gay bars.

On the 20th of July, 1982 the Provisional Irish Republican Army detonated two bombs during military parades in the centre of London. Eleven people were killed and around fifty others injured.

In addition to the deaths of soldiers and bandsmen, seven horses were killed.

While Gilbert “Danny” McNamee was convicted of the Hyde Park bombing (a conviction that was later quashed), nobody was ever charged with the bomb at Regent’s Park.

On the 26th of June, 1907, armed Bolsheviks stole a bank cash shipment in Tiflis (now Tbilisi, the capital of Georgia). Using bombs and guns, the attackers surrounded military and police in Yerevan (now Freedom) Square.

Amongst those involved in organising the robbery were future Soviet dictator Joseph Stalin, and Vladimir Lenin.

Forty people were killed and fifty others were injured in the attack.

The equivalent of millions of dollars were stolen, but in the end much of the money could not be used to fund Bolshevik activities, as the banknotes’ serial numbers were known to authorities.

Aftermath of the first of two assassination attempts on the life of Attorney General A. Mitchell Palmer.

On the 2nd of June, 1919 followers of Italian-born anarchist Luigi Galleani set off eight bombs simultaneously in eight different cities of the United States.

The bombs were sent to various government officials, including those who had supported the conviction and deportation of anarchists.

In response, several hundred anarchists were deported. The bombings were one of the major causes of America’s Red Scare, a campaign against Bolshevism and anarchism.

The Kashmir Princess, an aircraft operated by Air India, was bombed and sank into the South China Sea on the 11th of April, 1955.

Of the nineteen people on board, sixteen died.

It emerged that the target of the bombing was China’s first Premier, Zhou Enlai, though he was not on the flight. More recently it has emerged that he might have known about the assassination attempt and so did not board the plane, even though he claimed to have been delayed due to surgery.

The aeroplane was supposed to have travelled from Bombay, India to Hong Kong and then on to Jakarta, Indonesia.

While China accused the United States’ CIA for the bombing, America has always denied the claims. Evidence points to Kremlin-backed Chinese nationalist party Kuomintang as the likely bombers.

On the 30th of March, 1965 the United States embassy in Saigon, Vietnam was bombed by the Viet Cong. The attack killed twenty-two people and injured 183 others.

The vehicle containing the bomb held 300 pounds of plastic explosives. Even though it was suggested, US President Lyndon B. Johnson refused to authorise retaliatory raids on North Vietnam. 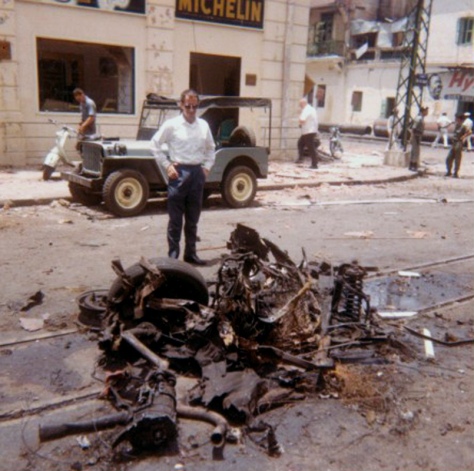 The Hilton Hotel in Sydney, Australia was bombed in the early hours of the 13th of February, 1978.

Two garbage collectors and a policeman were killed when a bomb was left in a rubbish bin outside. Eleven other people were injured.

It is still unclear who was behind the attack. 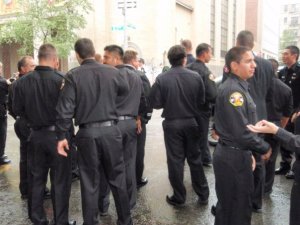 (Apologies for the pictures – we weren’t trying to win photography awards here!)

In 2009, when we were in New York, we went to visit the Ukrainian district of Manhattan. There’s a shop, a museum, a church, and a famous restaurant that is in all the guidebooks.

However, what we didn’t know until we got there was that the pub next door to the shop – McSorley’s – is the place the New York firefighters gather on September 11, because of some story about a fireman killed that horrible day who said he’d meet everyone there.

So we dropped by for a drink, only to find all these men and women who were involved in the horror of the Twin Towers collapse there. The pub stops usual functioning that day and just stocks the top of the bar with glasses of beer.

We were the only non-US fire-fighting, military people there. Three Australians versus a pub full (literally pressed up against them!) of GIANT men in uniform. Whoops!

I have never met such friendly people, who flat out refused to let us buy a drink. We said we should leave because we didn’t belong there, but they just kept on insisting they were honoured to have us there.

It was still a bit odd, but wow, what an afternoon.

I had met my parents in New York in the middle of their North American trip, and had two weeks there on my own, and there was my Vietnam Veteran father, and boy, didn’t he win some admiration! Not like the reception Vietnam Vets get here! 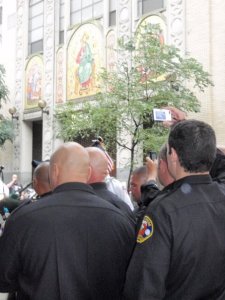 The parade, with Ukrainian building in the background.

Then after the drinks, everyone went outside and had a small parade with bagpipes, to honour their dead.

It is one of those travel memories that will always stay with you.

Yes, I know this post is dated the 12th! But we’re a day ahead of the US in time zones here…

On the 16th of April, 1925, members of the Communist Party bombed the St Nedelya Church in Sofia, the capital city of Bulgaria during a funeral service. 150 people were killed, most of them Bulgaria’s political and military heavyweights, and 500 others were injured.

Involvement from Moscow was suspected in the attack.

The church with the roof blown off.

The Wall Street bombing occurred at 12:01 pm on Thursday the 16th of September, 1920 in the Financial District of New York City.

At noon, a horse-drawn wagon passed by lunchtime crowds on Wall Street in New York City and stopped across the street from the headquarters of the J.P. Morgan bank at 23 Wall Street, on the Financial District’s busiest corner. Inside, 100 pounds (45 kg) of dynamite with 500 pounds (230 kg) of heavy, cast-iron sash weights exploded in a timer-set detonation sending the slugs tearing through the air.

Thirty-eight people were killed and one hundred and forty-three injured.

Though nobody was ever convicted of the crime, public sentiment at the time quickly led to people placing the blame on the Soviets or other Communists.

However, investigators and modern historians believe the attack was most likely carried out by Galleanists (Italian anarchists).

Damage from the bombing is still visible on 23 Wall Street.

The aftermath of the bombing.

The writing on the side of the picture reads: Dead in front of Morgan’s 1/16/20