The steamer the SS Mohegan sank off the coast of the Lizard Peninsula, Cornwall on the 14th of October, 1898. 106 of the 197 on board died, including Isadora Duncan’s father, stepmother and sister.

The Mohegan wrecked on the Manacles

Because all of the officers on board died in the wreck, no definite answers were ever given for why they had veered so far off course. 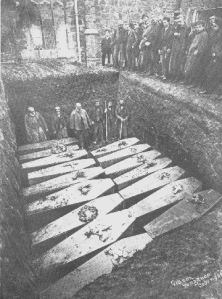 Recovered bodies are buried in a mass grave.